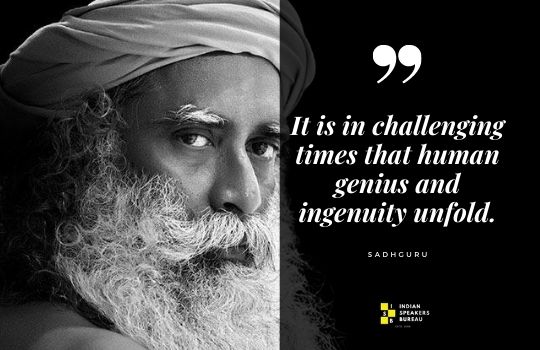 It needs no explanation that the year 2020 has been one of the most difficult years for the entire humanity. The personal losses of loved ones, job losses, uncertainty, chaos, and everything that we knew as a world came to a halt in 2020.

But one of the fine qualities of humans which have made them the most intelligent creature is their ability to learn from the past and approach the future with fresh hope.

We all have our own ways of motivating ourselves from the low moments. Some jog or play their favourite sport or read or write or trek or hang out with loved ones or drink or drive and the list goes on.

But one common activity that motivates everyone equally is listening to a motivational speaker. A daily dose of motivation from the speaker with whom we connect, and follow is all that is required to keep us going.

So, here is the list of the top 10 Indian motivational speakers you should follow on social media for you to stay motivated in 2021.

Official Social Media accounts of Sadhguru for you to follow:

Jaggi Vasudev, popularly known as Sadhguru needs no introduction. He is amongst the top 50 most powerful Indians according to India Today magazine. It is not just the millions of views and engagement his videos get online, but the amount of social activity being done by him through the ISHA foundation that differentiates him.

The tremendous work is done by him through Rally for Rivers, Gramotsavam (Rural Games Festival), Education, Plantation, Agriculture, Ecology, Yoga, Spirituality, Mental Health, Bike rally to understand native Americans and various other activities, has brought in a sea of change in millions of lives.

He is so popular on YouTube that he is also called a ‘YouTube Guru’! His daily wisdom on Twitter is eagerly awaited and read by millions every day. He is a great example of how a good speaker can grow his audience organically by effectively using digital marketing. So, Sadhguru tops the list of top 10 Indian Motivational Speakers in 2021.

Not every motivational speaker and Entrepreneurship coach can boast an active 11.5 mn YouTube subscribers, like Dr Vivek Bindra. It is not just the motivational and inspirational talks by him that have given him a huge fan following, but his actions and life journey itself are truly inspirational.

He is the Founder & CEO of Bada Business Pvt. Ltd. The ed-tech company aims to Empower Indian Entrepreneurs, Solopreneurs, and Wannapreneurs (students) to transform their businesses and careers.

Dr Vivek Bindra is a Five Guinness World Records ™ – record holder, and also has created the World’s No#1 Entrepreneur YouTube Channel. His massive entrepreneurial workshops like ‘Bounce Back’ and others attract thousands of participants to filled halls. Even during COVID, his conferences did not stop, as he switched completely online. He and his dedicated team teach entrepreneurs, not just about business strategies, but also tech hacks, like how to take your business online, how to quickly repair your laptop, how to install OS & various other topics.

Dr. Vivek Bindra’s plans for the year 2021 are bigger than ever, as he embarks on a mission to deliver World-class quality content to everyone in India. He is someone whom you should watch out for and he is on the list of top 10 Indian Motivational Speakers in 2021.

A Proud Indian and A Global Citizen, that’s how the young and dynamic Simerjeet Singh often introduces himself. He is one of the most sought-after motivational speaker and performance coaches in India, the Middle East, Singapore, and the USA.

A huge aficionado of Hindi inspirational poetry, Simerjeet Singh is one of the rare motivational speakers in India who has embarked on a journey to revive Hindi poetry in all its glory. He is amongst only a few who can deliver a full-length keynote speech in Hindi, as powerful as that of English.

Being one of the youngest motivational speakers in India, Simerjeet Singh encourages the youth to live a purpose-driven life – a lesson he learned firsthand. He has fueled positive change for international audiences from students to business leaders, by delivering motivational speeches on topics like Leadership, Team Building, Innovation, Sales Motivation, Entrepreneurship, Teacher Motivation & Youth Motivation.

Simerjeet Singh has made a name in the global arena at a young age by delivering motivational speeches at the UN and the one you should follow on Social Media to stay inspired in 2021. He is on the list of top 10 Indian Motivational Speakers in 2021.

Shiv Khera is one of India’s early motivational speakers and an Indian author of self-help books, including You Can Win, and an activist. He launched a movement against caste-based reservation in India, founded an organization called Country First Foundation, and started the Bhartiya Rashtravadi Samanta Party.

In 2004, he lost in a bid as an independent candidate for the South NCR constituency in India’s general election. He also filed several public interest lawsuits in the Indian Supreme Court and unsuccessfully contested the country’s 2009 general election. Shiv Khera‘s own life itself of great inspiration. He faced a series of failures in life as a Car Washer, Insurance Seller, and others, before becoming a successful motivational speaker and author. As he continues to inspire millions, he is featured in the list of the Top 10 Indian Motivational speakers in 2021

Sandeep Maheshwari is a leading motivational speaker, who turned his ‘another middle-class guy’ life into a millionaire. He has inspired millions who struggled, and failed, to lead a life of success, happiness, and contentment.

His urge of helping people and doing something good for society inspired him to take the initiative of changing people’s lives in the form of “Free Life-Changing Seminars and Sessions”.

He has been recognized as the Creative Entrepreneur of the Year 2013 by Entrepreneur India Summit, Pioneer of Tomorrow Award by the “ET Now” television channel and has also been featured in almost all the leading magazines, newspapers, and television channels such as The Economic Times, India Today, CNBC-TV18, IBN7, ET Now, NewsX and more. It’s only natural that he is getting featured in the list of the top 10 Indian Motivational speakers in 2020.

Priya Kumar is an Internationally Acclaimed Motivational Speaker, Keynote Speaker and Bestselling Indian Author of 12 Inspirational Books. In her 25 years journey as a Top Motivational Speaker, Best Inspirational Author and Keynote Speaker from India, Priya Kumar has worked with over 2000 Multi-National Corporates across 47 countries and has touched over 3 million people through her workshops and books, and is the only Woman Speaker in India to have done so. She is the only Indian Author who has won 42 International Awards for her books.

Gaur Gopal Das is one of the wittiest motivational speakers, who has been guiding students, celebrities, and corporate leaders all over the world. Based on the timeless wisdom coming down from ages, his talks make the audience think deeper and find simple solutions to difficult problems.

Gaur Gopal Das, is an Electrical Engineer, having studied at the College Of Engineering, Pune. After a brief stint with Hewlett Packard, he decided to upgrade his career to be a life coach. In the year 1996, he joined ISKCON & has been very active in this field ever since. Gaur Gopal Das has been speaking at various prestigious colleges in India and abroad for over 2 decades. He has been very actively involved in guiding leading doctors, and medical professionals across the globe. He has also guided top corporate firms and is featured in the list of the Top 10 Indian Motivational speakers in 2021

The New York Times called him the ‘the biggest selling English language novelist in India’s history. Time magazine named him amongst the ‘100 most influential people in the world and Fast Company, USA, listed him as one of the world’s ‘100 most creative people in business. Chetan writes columns for leading English and Hindi newspapers, focusing on youth and national development issues. He is also a motivational speaker and screenplay writer. Chetan quit his international investment banking career in 2009 to devote his entire time to writing and making change happen in the country. He lives in Mumbai with his wife, Anusha, an ex-classmate from IIM-A. He is of the youth icons of India and is one of the top 10 motivational speakers in Indian in 2021.

Swami Gyanvatsal is a Mechanical Engineer turned Spiritual Guru, who has inspired millions through his science research fille motivational talks. He is from Akshardham, BAPS Swaminarayan Mandir, Gandhinagar, Gujarat. The BAPS Swaminarayan Sanstha is a spiritual, volunteer-driven organization dedicated to improving society through individual growth by fostering the Hindu ideals of faith, unity, and selfless service. He has been a speaker at various seminars in Europe, England, America, Canada & New Zealand. Inspiring & motivational speaker talks about various subjects such as Proactive & Ethics which differentiate ‘ able leaders’ from ‘smart managers’. He is widely followed and so is on the list of top 10 Indian Motivational Speakers in 2021.

Abha Maryada Banerjee is India’s first woman motivational speaker of international acclaim, rated as one of the top 10 Life, Business and Success Coaches in the Asia Pacific. An expert in Leadership, Human Peak Performance, and Emotional Intelligence, Abha has been the Peak Performance/Mental Strength Coach for Indian Olympic Athletes. Having spoken at prestigious forums across Asia, she has coached and consulted top CEOs, Media personalities, Sports Stars, Business people, and leaders in the making and has been closely associated with the spiritual aspect of leadership as well.

Called ‘Asian Oprah’ and the ‘Asian Woman Motivator’, she professes ‘Personal Mastery’ for individuals and ‘Emotional Fitness’ for Corporates for achieving human capital excellence. She is one of the leading inspiring women and is featured in the list of top 10 motivational speakers of India in 2021

Back to TOP 10 INDIAN MOTIVATIONAL SPEAKERS IN 2021

To share the above images with your loved ones on WhatsApp, Facebook, Instagram, LinkedIn, Twitter, and others, just long-press if you are viewing it on a mobile phone or right-click if you’re viewing it from a laptop. Don’t forget to Tag Indian Speaker Bureau when you put these as stories from Instagram and Facebook!